Ralph Seliger is a veteran editor, blogger and freelance writer specializing in Middle East issues. He currently co-administers websites at http://thirdnarrative.org and http://www.ameinu.net. 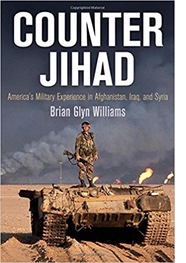 Although disappointed by the author’s opening chapter, I persevered to find the book a basically useful guide to the widely varying strategic moves of the United States in this era of the “War on Terror,” which has succeeded the Cold War in its intensity and impact. Amidst a jumble of facts, Brian Glyn Williams, a professor of Islamic History at the University of Massachusetts-Dartmouth, reveals some useful nuggets.

Still, he begins inauspiciously by positing, in italics, that “America’s pro-Israel stance is the cornerstone and foundation of the Muslim terrorists’ deep hatred of the United States, and no understanding of anti-American terrorism can be made without understanding this crucial background.” There are some statements by Osama bin Laden and other Jihadi leaders to support this claim, but there is no substantial evidence otherwise to suggest that Israel is at the heart of Al Qaeda’s decision to attack the United States on Sept. 11, 2001.

While there can be little doubt that Israel is part of the Jihadi narrative against the US and the West in general, it makes more sense to view the 1991 Gulf War against Iraq as the trigger for Al Qaeda’s enmity. Bin Laden is known to have urged the Saudi regime to accept the protection of his Jihadis against Saddam Hussein, rather than to house “infidel” Christian and Jewish servicemen in the land of Mecca and Medina, the Muslim holy land, as they massed to retake Kuwait and devastate Iraqi forces. This explains the timing of the beginnings of his anti-American Jihad in the 1990s, which he could have otherwise started right after the Soviets withdrew from Afghanistan and the first Intifada began in the Gaza Strip and West Bank, in the late ‘80s.

Nevertheless, Williams is non-ideological in his view of Israel, not seeming to call into question the legitimacy of the Jewish state’s existence, as befitting his generally centrist tone.

Having worked with the CIA on the ground in Afghanistan in 2007, the author’s narrative comes alive with his discussion of military operations to combat the Taliban, and in analyzing military strategies in the region in general. In contrast to Iraq, the US overthrew the Taliban regime without a large-scale land invasion, primarily by contributing air support to anti-Taliban Afghan ground forces.

He draws a respectful portrait of Abdul Rashid Dostum, an ethnic Uzbek who currently serves as Afghanistan’s vice president and has a history as an anti-Taliban warlord and general, whom the author got to know in the early 2000s and worked with during his time with the CIA. He also decried the emotional instability and political unreliability of former Afghan President Hamid Karzai, while writing sympathetically of his successor, Ashraf Ghani.

His analysis of where the Bush-Cheney administration went wrong in attacking Iraq is right on the money. While debunking the administration’s effort to tie Saddam Hussein to bin Laden, he does indicate that Abu Musab Zarqawi — the Jordanian-born brute who later founded Al Qaeda in Iraq, the progenitor of ISIS — danced around with Saddam as an independent Jihadi, sometimes distantly allied with him in fighting Kurdish nationalists in the north, while at other times positioned against him. But Zarqawi himself rejected bin Laden’s leadership more often than not.

There’s also the almost comic saga of Saddam’s non-existent WMDs, with Iraqi army generals stunned by his confession on the eve of the Bush-Cheney invasion that they were destroyed during the 1990s.

Despite the faulty justification for the second US-Iraq war, and the overwhelmingly negative response in most of the world, it might have emerged as a historical success if not for two bone-headed initial decisions made by Paul Bremer as head of the Coalition Provisional Authority (CPA):

(1) banning even low-ranking members of the Ba’ath party from state employment (effectively barring many Iraqis — but disproportionately Sunni Arabs — from regular jobs, given that party membership was a routine requirement for positions in Iraq’s heavily socialized economy) and

(2) disbanding Saddam’s army, just as key officers were offering to support the CPA — which, according to the 2007 award-winning documentary film No End In Sight, triggered the Sunni insurgency and the ensuing bloody sectarian violence.

The author is wise to emphasize the importance of these edicts, but it’s a widely shared insight. And he joins the chorus faulting Secretary of Defense Donald Rumsfeld for attempting to hit and run in haste, under manning the invasion force and not provisioning enough follow-through troops to insure a modicum of order in the wake of the Ba’athist regime’s sudden fall. Rumsfeld unrealistically expected to withdraw most US forces within three to four months.

For good reason, Williams is unsparing in his depiction of the so-called Neo-Conservatives, a clique of intellectuals and ideologues from whose ranks key staffers were appointed to the Bush administration’s Pentagon and the office of Vice President Cheney. It’s well documented that the rush to war with Iraq was rife with wishful thinking and manipulated uses of intelligence reporting, spearheaded in particular by Paul Wolfowitz, Douglas Feith and David Wurmser.

Donald Trump’s absurd 2016 campaign statement that US forces should not have left Iraq in 2011 without “taking” their oil, reminded me of Wolfowitz’s irresponsible testimony to a congressional committee during the pre-war debate when he asserted that Iraq’s oil would pay for the war.

Yet Bush’s second term was a departure from his first, with the President moving away from the dark influences of Dick Cheney and the Neo-Cons. Readers should note the author’s discussion of Bush’s second-term “surge” of forces, cast by the left as an escalation of the war, but actually a policy that likely reduced civilian casualties.

General David Petraeus is credited with embedding small teams within populated areas, where they cultivated trust, coming to be seen as protectors against sectarian violence. He also forged an alliance with the “Sons of Iraq,” a movement of Sunni tribesmen in Anbar Province who rose up against Al Qaeda in Iraq, funding them with bundles of cash even if many had previously fought the Americans.

But the Obama effort to duplicate the surge’s success in Afghanistan had less positive impact. The author sets us right, however, in rebutting the Republican criticism of Obama for not leaving more of a residual force in Iraq. For one thing, the withdrawal timetable was agreed to by President Bush in 2008.

Still, the author can be faulted for not mentioning the protracted 2010 electoral struggle that ended with a coalition of Shi’ites, Sunnis and secular elements led by the first post-Saddam prime minister, Ayad Allawi, being outmaneuvered by the rival slate of Shi’ite parties headed by Nouri al-Maliki, despite the former having won two more parliamentary seats. It seems apparent that if Allawi’s alliance of Shi’ite and Sunni parties had gained power, Anbar Province would not have become a bastion for ISIS.

Maliki’s blatant pro-Shi’ite sectarianism has to be considered a key factor in the revival of Al Qaeda in Iraq, this time as ISIS, successfully portraying itself as protecting the hard-pressed Sunni population. Prime Minister al-Maliki was forced from office with the stunning victories of ISIS in 2014. He had purged Sunnis from government, imprisoning many and even killing some, and reneged on the promise to incorporate Sons of Iraq Sunni militiamen into the national security services.

The concluding chapter on the war against ISIS is long on detail but short on organization, with events presented in a rather confusing whirl, gyrating between 2014 and the middle of 2016.

It’s probably not the author’s fault, but as the world contemplates dramatic changes in US policy with the new administration in Washington, a reader may be struck by the inadequacy of a book published in early 2017 to even note the possible impact of last November’s election. Perhaps the very medium of books is too slow for the head-spinning pace of our times.